What drugs are used in Volleyball 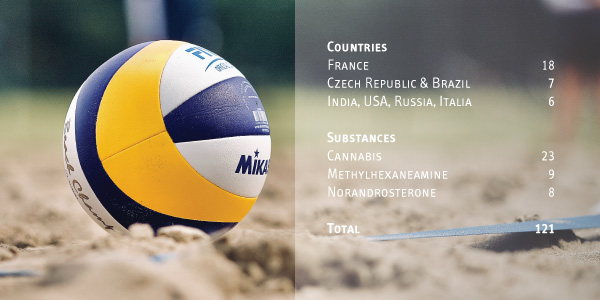 Cannabis is the most commonly used drug in the sport of volleyball, and France is the country with the most banned athletes.

In the sport of Volleyball France is the country with the most banned athletes. We have registered 18 players from France who has been banned. Brazil and Czech Republic follows with 7 banned athletes. 6 volleyball-players from Russia, USA, India and Italy has been banned for using doping.
The most used drug is Cannabis. 23 of the cases we have registered involves Cannabis. Methylhexaneamine is being used in 9 of the doping cases we have registered followed by the steroid Norandrosterone.
French volleyball-players also tops the statistics when we drill down and see which countries has the most athletes who has tested positive for Cannabis. We have registered 13 french players followed by Portugal and Belgium who both have banned two players.
Methylhexaneamine has been responsible for two Norwegian players banned. The rest of the seven comes from USA, Russia, Portugal and Poland to name a few.
Norandrosterone is responsible for two Indian volleyball-players banned from sport. The next six comes from USA, Turkey, Slovakia and Puerto Rico to name a selected few.
The Anti-Doping Database has been registering sports persons who has been banned for violating the Anti-Doping Rules since 2005. Our database is being used by Sports Journalists, Sports Lawyers, Academics and others from all over the world.

Photo by Miguel Teirlinck on Unsplash